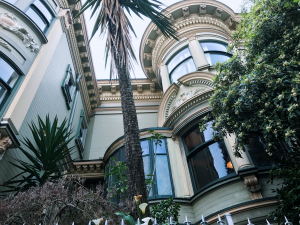 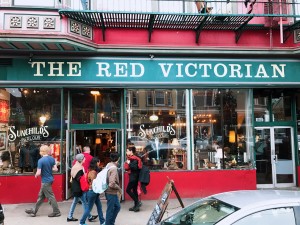 As San Francisco’s housing crunch continues, some residents are choosing to forgo traditional apartments and live in intentional, communal living under one roof — echoing the type of housing that emerged during the hippie movement.

This year, on the fiftieth anniversary of “The Summer of Love,” many think that tech has changed the city for the worse, but the movement isn’t dead.

“The narrative is very much around how San Francisco is over and tech has ruined the city, but actually there is this strong counterculture all over the place, where people are providing mutual aid and shared learnings and doing all sorts of interesting things, and this isn’t really seen,” said Zarinah Agnew, a proponent of communal living and a resident and founder at The Embassy.

In this 360-degree, immersive video piece, take a tour of the Red Victorian, learn about the communities that have sprung up in the Haight-Ashbury and experience what it’s like to live communally in the 21st century.

A commune is an intentional community of people that live together, share common interests, collaborate on ideas, and often have common values and beliefs, as well as shared resources and responsibilities. A big part of it is the interpersonal dimension – communes offer an escape from the cult of individualism, by connecting you with people to hang out with and grow close and intimate with, in a society where a lot of people lack social connection. Furthermore, there are also a lot of economic benefits.

“I cook once a month and am cooked for the other 29 days of the month,” explained Eric Rogers, a resident at The Red Victorian. “I have this huge building at my disposal. I basically have the biggest house out of anyone I know. And that’s a really nice thing to have in a city that has extremely expensive real estate”

Built in 1904, the Red Victorian has been a cornerstone of the Upper Haight and a gathering place for revolutionaries, artists and travelers. Before it became a commune, the building was a historic peace and love hotel from the 1970s, and a meeting place through housing political protests, radical new ideas, artwork, creativity and conversations around creating world peace.

About 20 residents live and work together to build a rich community in The Red Victorian. It welcomes its residents to host and attend events from talks, classes and skill shares to music nights, book discussions and family dinners. It is also run as a small hotel, by renting out unoccupied rooms and making selected visitors staying in The Red Victorian feel like coming home to friends and family.

It is part of a greater international commune network, along with the flagship house The Embassy. Both communities work closely together and have great vision in bringing forth change they want to see in the world.

“I would describe our community as a very creative and diverse group of people that are very interested in improving the world and also changing some of the systemic ways in which the world operates and perpetuates culture,” Rogers said.

They are also part of the 11 houses that comprise the Haight Street Commons network, a group of communities united by geography. Every community operates differently. They make their own house rules and standards for housemate selection. Some are larger and house up to 30 residents; others are smaller and bring together a dozen people. When a new community starts, there is a lot of intention setting and meetings around what values the house should uphold and live by. As a result, you end up with a broad range of lifestyles and ‘vibes’ in these houses – whether it is creating a space to focus on art, or a place to experiment with consensus-based decision-making, or more inwards-focusing goals and creating meaningful bonds with housemates.

“Our communities are about creating tiny pockets of experiments,” Agnew said. “I think it’s a great thing that we operate differently, it would be sad if we all do the exact same thing.”

The members of these various communities connect and attend each other’s events. As a result you see a lot of crossover and friendships, creating a greater community of like-minded people, all diverse in origin, age and walks of life, but united by their choice to live their life with intention. And you really see them come together to support each other and learn from one another.

“Until now, we’ve largely had a society that has evolved and we’ve never really had one that was designed. And we’ve certainly not had a chance to vote or experiment on the kind of society that we might like to have that actually represents all of us, and I’d like to see the communes being these places where we get to experiment with how we might like to operate and sharing these learnings between us,” Agnew explained.

People have been living communally for thousands of years, whether it is with tribes of hunter-gatherers or extended families. It is only recently that atomized living became such a prevalent notion in Western society. Surges in popularity of communal living, such as the ones we’ve seen in the 1870s and the 1960s have been associated to slums in our economy, so there are a lot of dimensions at play — political, cultural and economic among others.

For communal living to thrive in the future, there are a lot of systemic and legislative challenges that will need to be addressed. Financially, it is very difficult to start a commune or to find suitable buildings. Communal dwellings are frequently inspected, according to their organizers. City officials may not understand what communal living is, since it doesn’t always fit into predefined boxes and categories. As a result, this movement has challenged the meaning of the word ‘family.’

There are two major ways that communes can compete with our notion of family. First, there is the dimension of company and emotional support, and second, from an economic perspective, shared domestic labor. Some states in the U.S. to this day, dictate that you cannot have more than four unrelated adults living in one household.

“Generally speaking, American society has been told that you do that within a family. But we’ve realized that it can be a lot more effective if you do it on a larger scale,” Rogers explained. In fact, The Embassy commune has seen families with kids among its residents in the past.

“I’m in this in the long run,” Rogers said. “I’m not doing this as a youthful thing that I look back gleefully on when I’m an old person or a person with a family. For me I’m really interested in redefining what family means.”

Rogers will be pursuing his Ph.D. at Cambridge this fall, writing his thesis on Communes in the 21st Century.